“The Fight for Home” 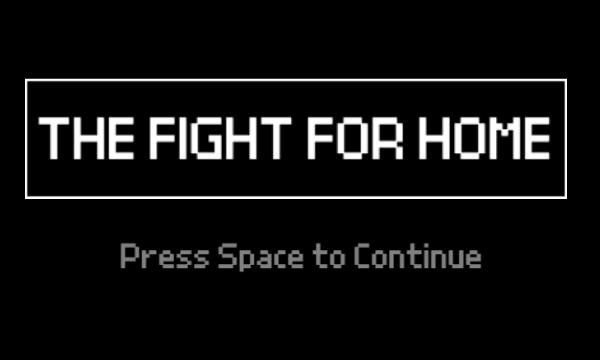 “The Fight for Home” is a game that was made to encourage children to take part in helping the Earth become a better place for mankind. We wanted to give pollution a character because we believed that many little kids would be able to “see them more clearly” if the antagonist was a visible sprite in front of them, to battle. Also, the idea that there would be a bad guy to represent this would be much more fun to tackle and imagine in our own world. This way, we hoped that we could entertain as well as inform. The story follows Beo, a young character that wasn’t aware of the impact until things got out-of-hand. This is meant to represent how many people around the world are ignorant of how we are destroying the ground we walk upon, and are likely only to notice after it is too late. We meet the character Vop along the way, someone who has suffered great consequences due to pollution. Vop and Beo are made as stark contrast, one who “lives in the past” and one who “lives in the future.” Vop, unlike Beo, has become familiar with the polluted skies all too well. Beo would soon find himself battling the antagonist we might not have noticed lurking in our streets: Pollution.
---
We chose this topic because it deals with serious themes that are currently taking place in our world. There are also so many angles we can take, changing perspectives and how something can make you feel. There were a lot of presentation ideas, and what the player would do during gameplay. Even though the idea of keeping our planet clean has been demonstrated to children many times, it’s almost never in a way that the kids would actually enjoy. If they do not enjoy it, the information will go in one ear and out the other, and before you know it, class is dismissed, and they can go back to whatever they were thinking about. It’s something that most people don’t recognize- as untraditional as it may seem, we need to put this topic into an enjoyable form for kids to actually pay attention to it and put it in their own lives.
Along with this idea, we have to note that many people who try to raise awareness about it are adults, and adults don’t really get what clicks with kids these days. Often, they will be presented with a documentary, a slideshow, a lesson, a passage, etc. But none of things peak the kid’s interest. Yes, many people have been raising awareness about this topic already, and it has been repeated over and over and over in school and other educational places. But I doubt that the majority of the kids viewing the information have been interested. With this game, we want to get the kids invested, and make them look at the situation with the idea that this is something they can be a part in, this is their world, too.

We have created a slide show that discusses our brainstorming process and how to play our game.