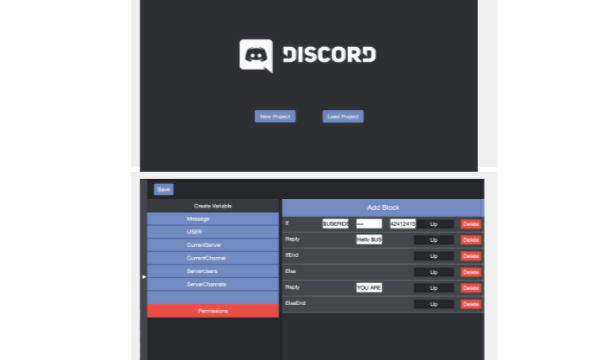 Our project a Discord Bot Engine. There is a messaging platform called Discord widely used to communicate with others. Our project allows anyone with no experience with programming to make a discord bot using a simple easy to use application to create any bot you can think of using blocks like those found on Scratch.

We came up with our idea when we realized that knowledge of how to program efficiently was really uncommon, so we decided to make it easier for everyone else.

Our idea evolved into this project that you see called Discord Bot Engine, allowing anyone to create Discord bots without any prior programming knowledge.

Our project works like the child’s programming language, “Scratch.” There are drag-and-drop blocks that users can interact with to create instructions for the bot.

We want to allow everyone in the world to create discord bots, regardless of their coding experience.